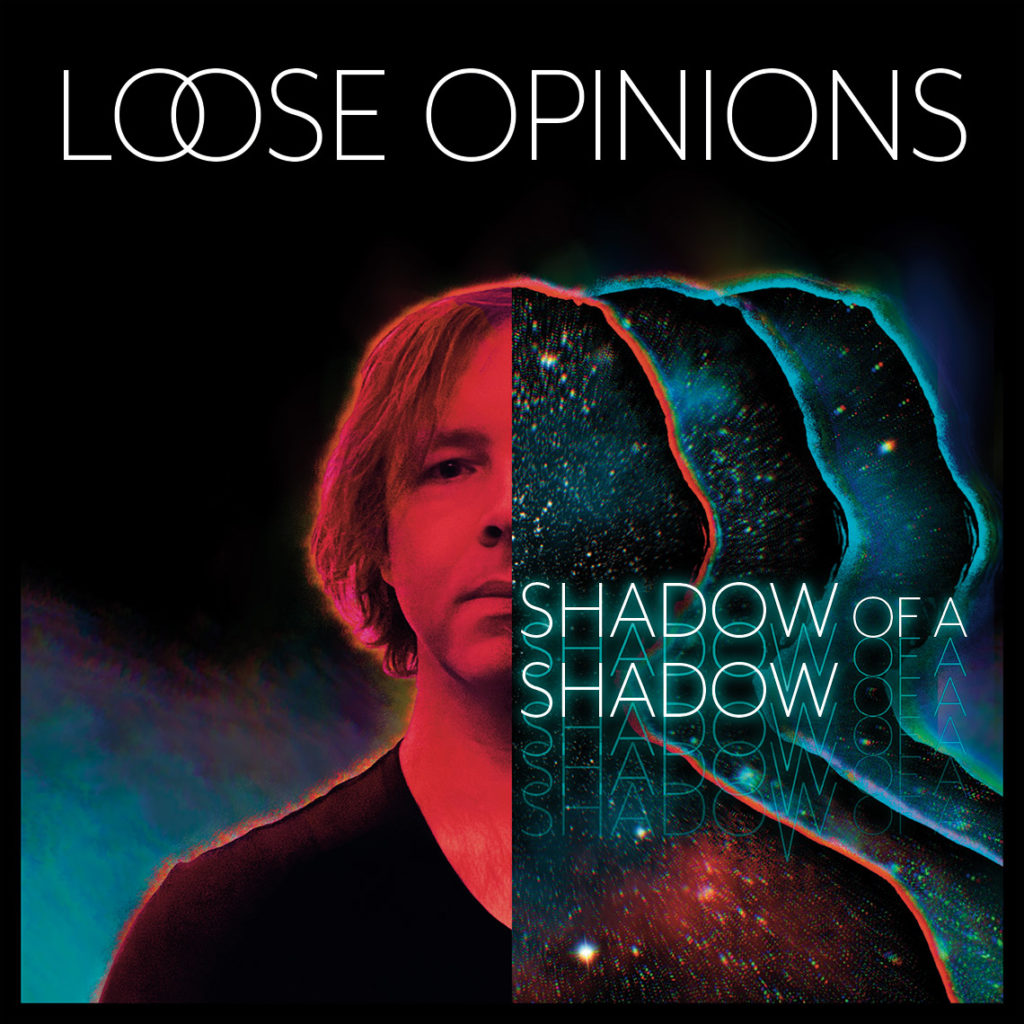 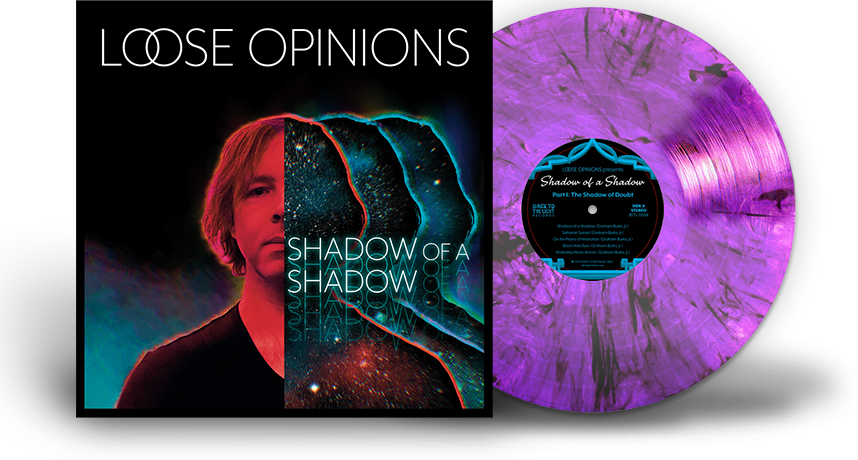 Each album side is a continuous, uninterrupted piece of music. Mastered for vinyl by Jeff Powell at Take Out Vinyl in Memphis, TN, and manufactured at Memphis Record Pressing. 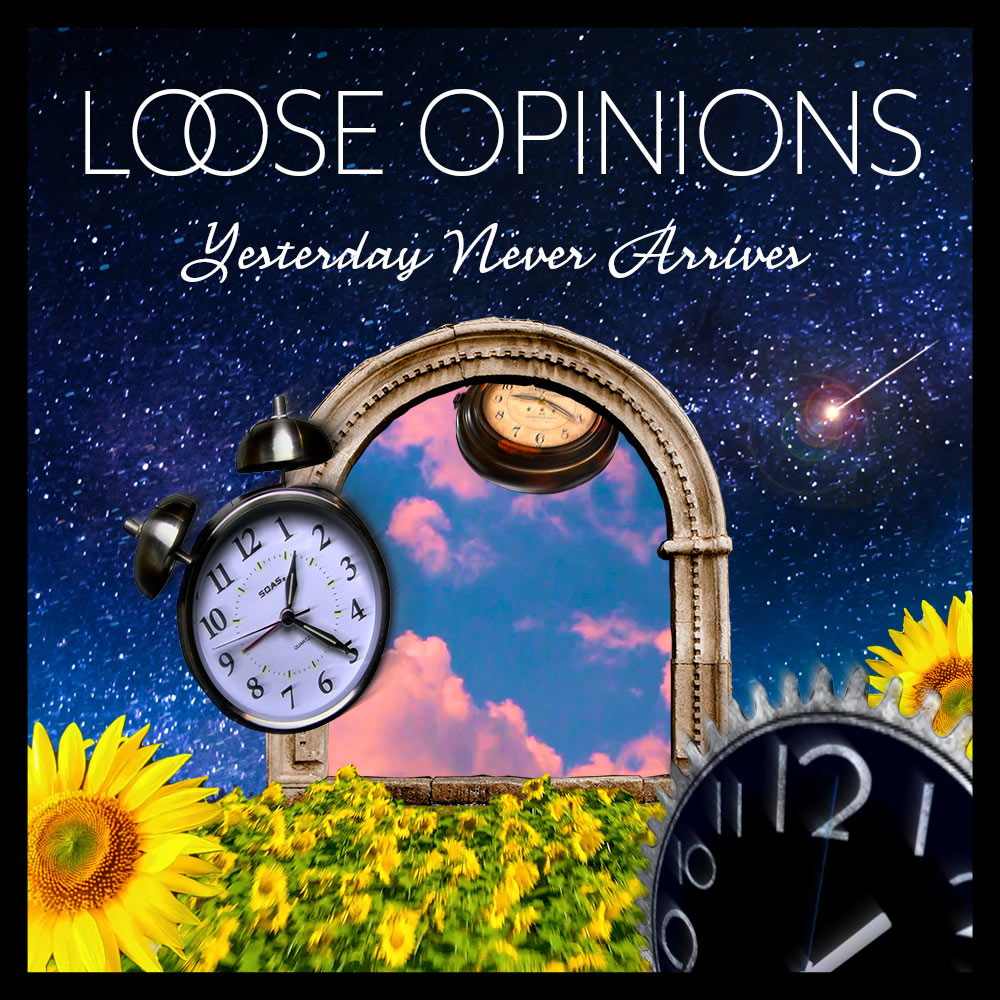 Listen on Spotify
Purchase/Listen on Bandcamp
Listen on Apple Music

UNDER THE RADAR | Premiere: Loose Opinions Debuts New Video For “Shadow of a Shadow”

“Nervy guitar lines and propulsive bass color the song as Burks’ vocals wind and twist. As the song hits a fever pitch it then shifts into a dreamy haze of pulsating synths and echoing vocals in the second half, drawing the song to a close in a floating psychedelic daydream.”
READ REVIEW
PREMIERE

Music Video Monday has opinions. Loose Opinions, that is. Graham Burks Jr., a Pezz alum who has played with everyone from Sweet Knives to Magic Kids, has a new solo project. Burks played almost every instrument on Loose Opinions’ debut full-length Shadow of a Shadow.
MUSIC VIDEO MONDAY
PREMIERE

BACK TO THE LIGHT: New episode: Shadow of a Shadow with Graham Burks (Loose Opinions)

Host J.D. Reager talks to his friend, frequent collaborator and Loose Opinions bandleader Graham Burks about the night they met over 20 years ago, how Graham developed an interest in music early on, and his rich and eclectic musical history. J.D. also spins the extended version of the title track from the new Loose Opinions album Shadow of a Shadow, and Graham performs live from his home studio in Memphis.
LISTEN TO PODCAST
PODCAST

Graham Burks has always been in the shadows of a shadowy scene, in a city better at producing cult classics than breakthrough stars.
LISTEN TO THE ALBUM
Premiere

Memphis' Loose Opinions, the brainchild of Graham Burks, Jr., shares the infectious pop enthusiasm of "Yesterday Never Arrives." The single is off the forthcoming Shadow of a Shadow, dropping on August 20, 2021.
Read more
Premiere 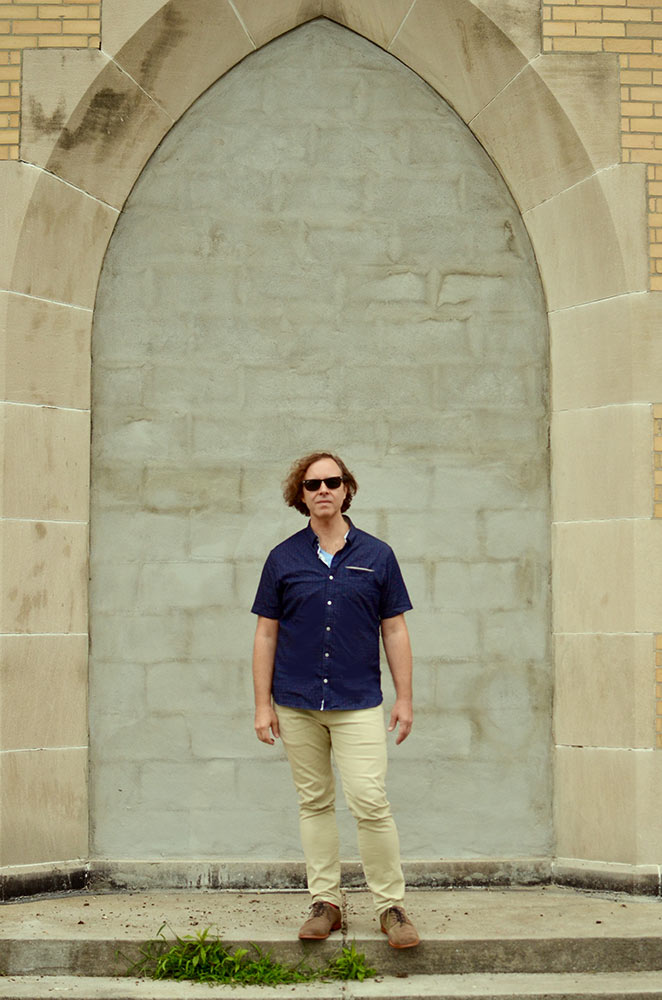 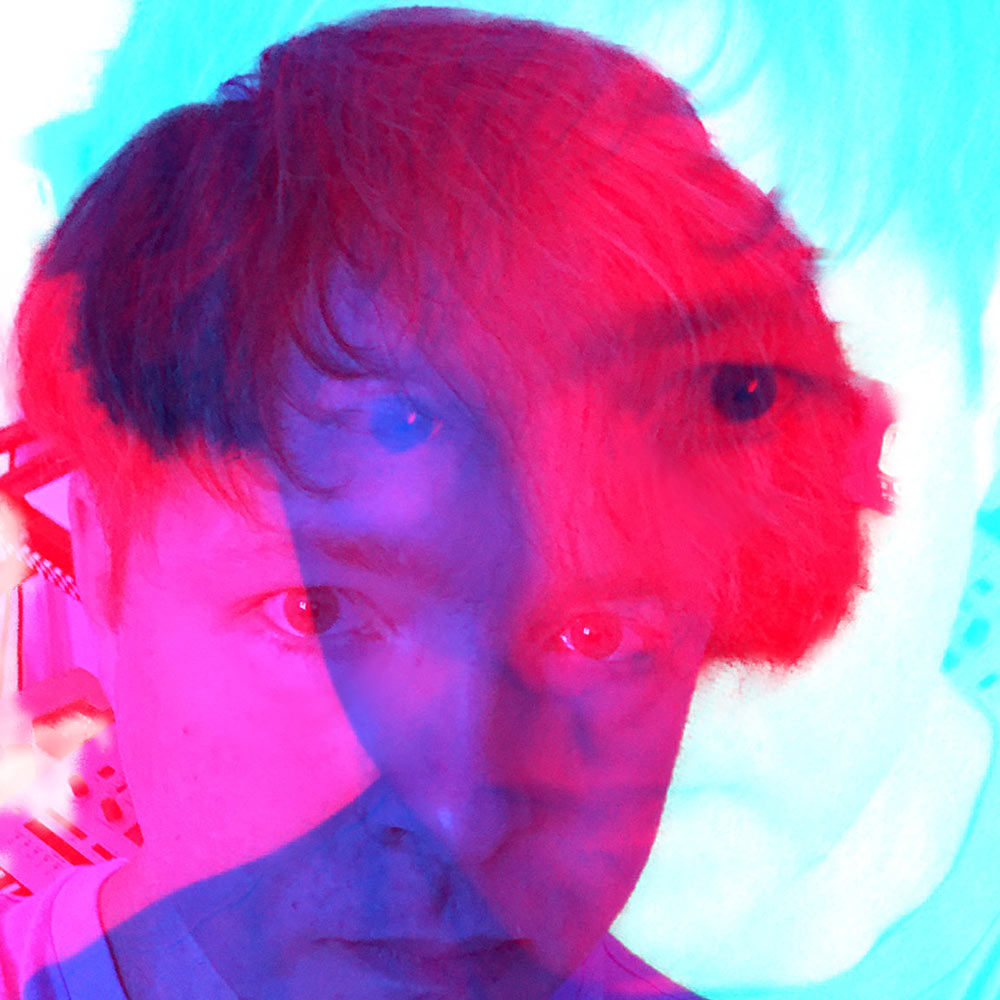 Memphis, Tennessee’s multi-instrumentalist and producer Graham Burks, Jr. has always been in the shadows of a shadowy scene, in a city better at producing cult classics than breakthrough stars. He has toured and played with some of his city’s notable garage/psych/punk bands, be it no-wave analog synth with ex-members of Lost Sounds in Sweet Knives, drums for punk veterans Pezz, chamber-pop bass lines with Magic Kids, or experimental electronics as Infinity Stairs. Now, with Loose Opinions, Burks has stepped into the light.

As a kid, life was all about skateboards and punk rock, and Burks found himself playing all-ages shows at Memphis’s legendary Antenna Club. He shared the stage with the likes of Dead Milkmen, 7 Seconds, the Descendants, and the Meat Puppets; not to mention locals like the Oblivians, the Grifters, Neighborhood Texture Jam, and Big Ass Truck.

As a drummer, Burks frequently had band members leave their instruments at his house, and he started making lo-fi four track recordings of songs playing any instrument within reach. His love of home recording led to an internship at Memphis’s famed Easley-McCain Recording. In those days, bands such as Sonic Youth, Wilco, Guided by Voices, Pavement, and the White Stripes were coming through to make records.

Burks continued stretching himself as a multi-instrumentalist, forming Small Room as a bass player, and later, needing a vessel for his songwriting, he formed Perfect Vessels as singer / guitarist.  Synthesizers and electronic music had always been a side interest, but it wasn’t until he toured with Sweet Knives, playing synthesizer in a punk band, that he learned to more fully incorporate synth sounds into his song-oriented projects.

The pandemic forced a change in focus, and in 2020 Burks turned his attention to his solo studio project Loose Opinions. Yet, this period was marked with personal and collective frustrations, and he found himself creatively stifled. Later that summer, inspired by a sense of connectedness with a world determined to overcome its difficulties, the creative energy began to flow. Shadow of a Shadow, Loose Opinions’ debut album, quickly emerged.

“While I was fortunate enough to keep working during the pandemic, I had this overwhelming sense of disappointment in myself” says Burks. “I was supposed to have all of this extra time on my hands to be creative, but instead all I felt was uninspired. Months later my friend and collaborator J.D. Reager broke out of his own rut and started Back to the Light, a creative collective consisting of a podcast network and record label. J.D.’s spark helped me find mine. For the first time in a long time, I felt connected to the world. Albeit, the connection I felt was based on frustrations that we were all feeling, from pandemic isolation to systemic racism, but we were feeling it together.”

Inspired, Burks wrote and recorded Shadow of a Shadow at home. He played all the instruments, establishing an eclectic palette of layered vocal harmonies, heavily affected guitars, bass, vintage analog synths, live and programmed drums, and the swirl and strum of his vintage Omnichord. The only outside musicians on the album are Memphis horn players Victor Sawyer, Tom Clary, Jim Spake (Lucero), and Bill Bullock, along with a remote contribution from Seattle’s Jeff Waggoner (JERF).

In support of the album and in celebration of the return of live music, Loose Opinions has now expanded into a full live band, featuring members of Hi-Electric, Perfect Vessels, Jack Oblivian and the Sheiks, and the Reigning Sound. Shadow of a Shadow is one of several 2021 releases by Back to the Light Records, in addition to an album by label founder J.D. Reager that Graham performed on, and an album by the Reigning Sound’s Jeremy Scott, which Graham produced, recorded, and performed on.

Shadow of a Shadow was written with the vinyl format in mind, and each side of the album is an uninterrupted continuous piece of music, each song melting into the next one. It was designed to compel listeners to slow down, put a needle on the record, and sink into the moment. 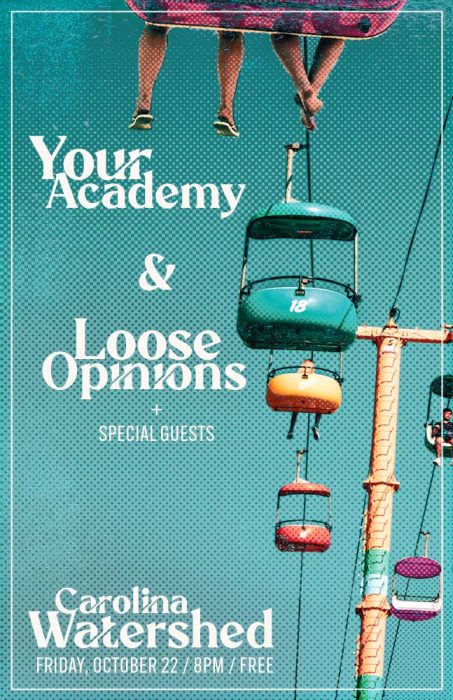 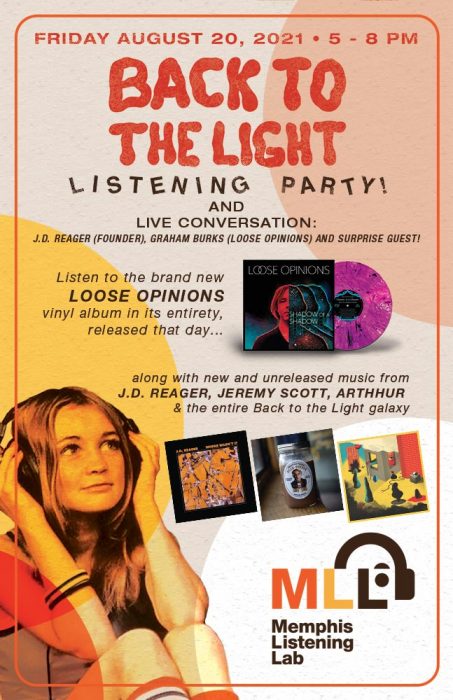 RECORD LABEL
J.D. Reager / Back to the Light
jdreager901@gmail.com

Loose Opinions is a part of the Back to the Light Records family.

Back to the Light was founded in June of 2020 by J.D. Reager as a Podcast as well as a Podcast Network and a Record Label. The roster includes J.D. Reager (Glossary, Pezz, Two Way Radio, Snowglobe and the Passport Again), Jeremy Scott (The Reigning Sound, Toy Trucks), Arthhur, Blindcopy, Jack Alberson, Joshua C. Travis, Two Way Radio, Tape Deck, along with Loose Opinions. 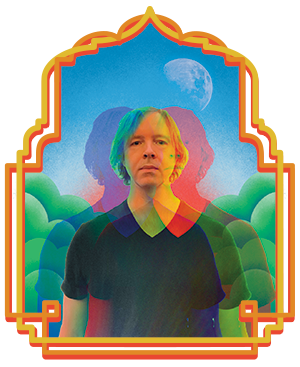